Room number 3 – Lloret: the room is located in the tower and is quite unique. It is designed in an open-plan concept and has no balcony or terrace but has four windows offering 360 degrees of spectacular views of the picturesque countryside which more than compensates for the lack of a balcony. Very few locations could compete with the views from this room, especially the incredible sunsets. A single room with a double bed in which two people can stay comfortably.

Although the room is compact it contains all the facilities you would expect; a comfortable double bed 1.50 metres wide, closet, individually controlled air-conditioning(hot and cold according to the season), DTT and satellite television , HDMI and USB sockets for your laptops, gadgets, a mini-bar and a safe.

The bathroom facilities which include; a walk-in shower, washbasin and hairdryer are integrated in the open-plan room but are separated by glass partitions. The height of the room is standard but as you would imagine in a property which was built centuries ago, the height of the staircase is lower than modern builds and for taller folk you may need to stoop your head slightly when using the staircase.

The room is named “Lloret (de Vista Alegre) as the window on the west side is orientated towards the village. Since the late 16th century, the locals call the village “Llorito” due to the prominent role of the convent of our Lady of Loreto.

Market day is held on Mondays and you will encounter many ethnological elements of the Majorcan culture.

If you like, when you make the reservation, you can choose your preferred room and, if it is available, we will satisfy your request. 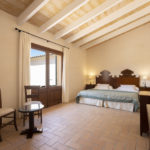 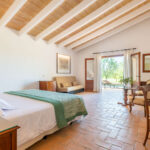