Sineu is a small town at an altitude of 145 metres with 3641 inhabitants and 6.5 kms away from Gossalba. It is the main market town of the central Mallorcan plain and used to be the where the Kings of Mallorca had their summer residence.

This route is entirely followed on rural tracks, some with tarmac, others not. The landscape is typical of the centre of the island with land given over to growing cereals, olive trees and grazing sheep. During the spring it is particularly spectacular when carpeted with poppies.

As we arrive in the centre of the town, we pass alongside the walls of the old Kings´ summer residence which was later used as a convent until quite recently.

We then arrive at the square of the spectacular church, surrounded by narrow streets until it opens in Plaça des Fossar, where the oldest market in Mallorca is celebrated. 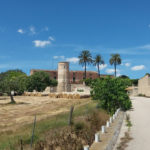 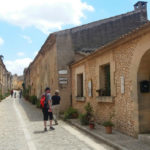