The Puig de Sant Nofre is a mountain rising out of the central Mallorcan plain, half way between the towns of Sant Joan and Sineu.

It rises to 254 metres and the whole of the Puig is protected as a Natural Area of Special Interest (ANEI). At the top there is a hermitage dedicated to Sant Nofre, and which, between 1400 and 1412 was inhabited by a hermit.

Legends related to the Puig

The crows: according to tradition, a pair of crows always lives on the hill and when one of the two dies, the other always looks for another partner.

The hawks: also it is said that on the high ground a pair of hawks have the habit of attacking the pigeons that live in the bell tower of the church in Sant Joan.

The dogs´ jump: a cliff from which the locals dispatched their terminally sick dogs before the days of veterinary surgeons.

The table of Sant Nofre: on the west front of the mountain is a rock which they used to use like a sundial. When the sun hit the rock, they knew it was midday. 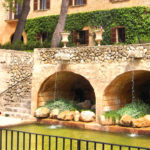